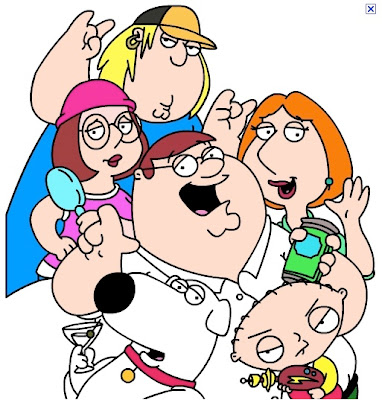 Good translation is an art, and Google Translate is, well, a fart. It stinks, especially with so-called minor languages, meaning languages not spoken by a lot of people. Like Czech. Admittedly a difficult language that, despite years of study, I have never been able to master. My latest study strategy is to download American television shows, like "Family Guy," with Czech subtitles. That way I get to learn interesting words that you'll find nowhere in standard grammars, like how to call someone a fatass, which, for the record, is tlustoprde ... if you can believe what you read, which, after reading the translation for the theme song, became a bit of a leap of faith — almost as much as taking directions from Google Maps.
As every emotionally and intellectually stunted fan of this utterly inappropriate, outrageously funny cartoon knows, the lyrics go like this: "It seems today that all you see is violence in movies and sex on TV. But where are the good old-fashioned values on which we used to rely? Lucky there's a Family Guy. Lucky there's a man who positively can do all the things that make us laugh and cry. He's a Family Guy! " Here are the subtitles you see at the bottom of the screen: "Já čekam jen, kdy už zmizi samý sex a násili z televísí. Kde starý dobrý hodnoty jsou? Nám nezbyvá, než se ptát.  Ženatej chlap nejlip se má. Když ho botka tlačí, vyjmenuje radši všechno, co mu nejvic zabrat dá. Ten se nejlip má!"

Now, Bůh ví, že nejsem expert/God knows I'm not an expert, but I knew right away that there was a problem: "Já čekam jen? I'm only waiting? Then, what was that business about the little shoes in the fifth sentence all about? I asked Google Translate, which spit out this nonsense: "I'm just waiting, when they disappear on their sex and violence from televisa. Where are the good old values​​? We have no choice but to ask. Married guy with the best. When he pushes the shoe, rather enumerates all you, can take him the most. He has the best!

Which left me thinking ... Huh?

So I emailed Ilo, my current Czech teacher, a native speaker, and asked her to clear the, um, fragrance of Google Translate from the room, and this is what she came up with: "I am waiting for when all sex and violence will disappear. Where are lost the old-fashioned values? We can only ask now. Married man has the best time. When he is in trouble, he can start mentioning all the difficult things in his life." The idea here is that "botka  tlačí" is like "when life kicks you in the ass" and "Ten se nejlip ma" is idiomatic, meaning, roughly, he's a very lucky guy.

All of which reminds me of what the poet says: "Mohlo by to býti k zlosti ale je to komické." Which GT translates as, "It could be infuriating, but it's funny." Which ain't bad. The poet, for the record, is Egon Bondy. The Plastic People of the Universe used the line in a song called "Toxica."
Posted by JC Lockwood at 10:08 AM

Older Post Home
Subscribe to: Post Comments (Atom)
Hello, hello, hello
I can see by your coat, my friend, you're from the other side ... Sometimes, hard as it might be to believe, we find things on the other side of the river that are intriguing and worth writing — and reading — about. That's what this blog is about. Now, friend, could you spare some of those purple berries?

JC Lockwood
I'm a scribbler. I write about the arts — books, music and theater. Local stuff, mostly in Newburyport, on the North Shore. I've been doing it for a long time. I started back when newspapers mattered and you could make a living at it. Almost. Now they're on the brink of extinction and have all but abandoned arts coverage, but I'm still doing it ... as a freelancer, as a blogger. I guess, it's who I am. If only I could make a living at it ... Got something going on? Wanna talk about it? Give me a shout: srat@me.com